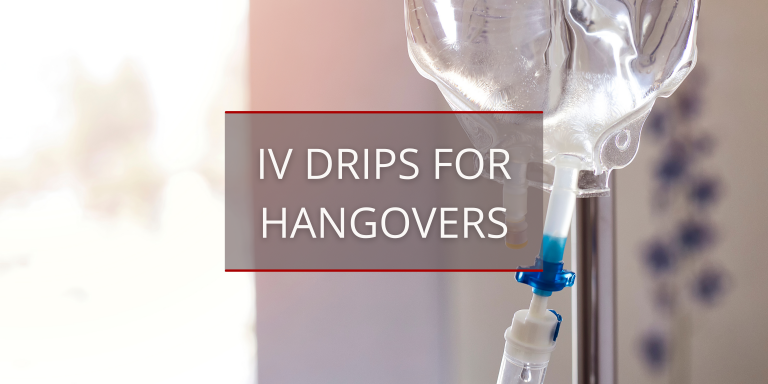 To get rid of hangovers, IV hydration drips have become popular. Many individuals swear by its capacity to get them back to feeling great the day after binging on alcohol, whether they get it at IV hydration clinics or home.

What Are Intravenous Hydration Fluids?

IV hangover drips are a combination of water, vitamins, and antioxidants used to rehydrate a person who has consumed a lot of alcohol.

IV fluids for a hangover are used to replace fluids and electrolytes that have been lost due to alcohol intoxication. Intravenous fluid replacement may seem like a good idea because losing these critical blood components creates the symptoms associated with heavy drinking.

IV hangover treatment is the fastest approach to get rid of a hangover since it provides electrolytes and fluids directly to the bloodstream, bypassing the gut.

Following substantial alcohol consumption, many people report feeling better after receiving IV fluids at home. The Food and Drug Administration and any research study have not approved or confirmed these claims.

These fluids have a simple foundation: Rehydrate a person and refill nutrient stores that have been depleted. Is an IV hangover drip effective in treating a hangover?

While no studies have been done to confirm the usefulness of intravenous drips, many healthcare practitioners believe that they effectively reduce symptoms associated with heavy drinking.

How Do IV Hangover Drips Work?

To receive an IV drip, a doctor inserts a cannula into the patient’s vein and swiftly removes the needle from the plastic after the cannula is in place. Each IV bag for a hangover includes 500 to 1 liters of liquids and is attached to a cannula to distribute the fluids.

The fluid may be given slowly or quickly depending on how dehydrated the person is. The drip replaces the water lost, and other ingredients of the drip help relieve symptoms of the hangover.

Common Ingredients of an IV Fluid for Hangover

Intravenous hangover drips are available in a variety of forms. Water, vitamins, electrolytes, and glutathione are the four most essential components in most of these.

Water is the best hangover cure drink because it keeps you hydrated, which helps to alleviate the effects of an alcoholic binge. After a night on the town, rehydrating with intravenous fluids helps to purify blood circulation by pushing toxins quickly via the kidneys.

Vitamins are also a big part of a lot of hangover IV infusions. B-vitamins (vitamins B1 and B12), vitamin C, zinc, and folic acid are among the vitamins and minerals impaired by alcohol in the gut.

Although the body only requires modest amounts of essential nutrients, they play a crucial part in how it functions and must be supplied. Vitamin B12, for example, keeps nerves and brain cells growing and working at their best, and folic acid keeps hemoglobin manufacturing at its best.

During withdrawal, electrolytes such as potassium and sodium are depleted. Vomiting and diarrhea, which are common morning-after symptoms, cause the body to lose these substances, leading to severe consequences.

An extremely low potassium level, for example, might cause severe exhaustion and, in extreme situations, cardiac arrest. IV hangover therapy refills these stockpiles and keeps them balanced in the blood. What to eat while you’re hungover to restore these electrolytes are foods high in these chemicals, such as bananas.

One of the most powerful antioxidants, glutathione, is a crucial component of these intravenous drips. Glutathione aids liver detoxification by removing toxins generated during the breakdown of alcohol from the liver and circulation.

Other medications, such as pain relievers, anti-nausea, and antiemetic medications, may be included in intravenous drips. The drips quickly carry these drugs into the bloodstream, alleviating pains and stomach pain.

What is the purpose of IV drips? What benefits does it provide? The advantages of intravenous hydration for hangovers are as follows.

Intravenous hydration works by bypassing the digestive tract and immediately entering the bloodstream to rectify fluid and electrolyte imbalances. Within minutes, the symptoms are relieved.

To undergo intravenous treatment, one does not need to travel a long distance to a hospital or clinic. Purchase a home IV hydration kit and rehydrate without lifting a finger. Mobile hydration clinics are available in several intravenous hydration lounges to reach patients where they live.

IV fluids contain the essential ingredients indicated above, but they can be available in various formulations to fulfill differing fluid and nutrient requirements.

Provided by a Medical Professional

What is the best cure for a hangover? IV drips may be the answer to this all-too-common question. These drips replace fluids and nutrients lost after drinking heavily, relieving many symptoms.

However, it helps to be cautious with the use of these fluids. It needs to be administered by a health care provider to prevent health complications.

If you aren’t sure if IV Therapy is the right choice for you feel free to reach out to a local IV Therapy clinic, like IVitality.ept. We are happy to answer any questions you might have regarding your physical well-being.